Stephen Carradini and Lisa Whealy write reviews of instrumental, folk, and singer/songwriter music. We write about those trying to make the next step in their careers and established artists.

Two years ago I ran a Kickstarter so I could pay the fees associated with compiling an album of my favorite bands playing The Postal Service’s music. (You can’t get Never Give Up from the usual sources, but I’m informed it is still out there on the torrents.) The Collection’s version of “The District Sleeps Alone Tonight” kicked off the album in grand, enthusiastic fashion–I was honored to have such a complex, beautiful rendition open the project.

I get to be honored twice by the same song, because today the Collection have graciously allowed IC to premiere their video for “The District Sleeps Alone Tonight.” The 6-minute video includes seven of the Collection’s members creating a huge, textured sound. Overall, I am always impressed by their expert clarinet arrangements, played by Hope Baker; working a single woodwind into the mix of a rock band in a way that is both audible and meaningful is more difficult than you might imagine. (That’s spoken from experience.) David Wimbish’s powerful vocals also live up to their great potential here.

The best section of the video is the long instrumental bridge, where Hayden Cooke’s bass work really takes off. The forward motion of the energetic bass line gives a section that might get mired down in long instrumental crescendos a levity that takes the song from good to great. The bass and drums lock in perfectly, which grounds the work and allows the rest of the instruments to build. It’s an excellent arrangement of a wonderful song.

The Collection is headed out on tour later this April, hitting some of the Midwest, Mid-Atlantic, and South. If they’re going to be in your area, you should really check them out: their live show is amazing. 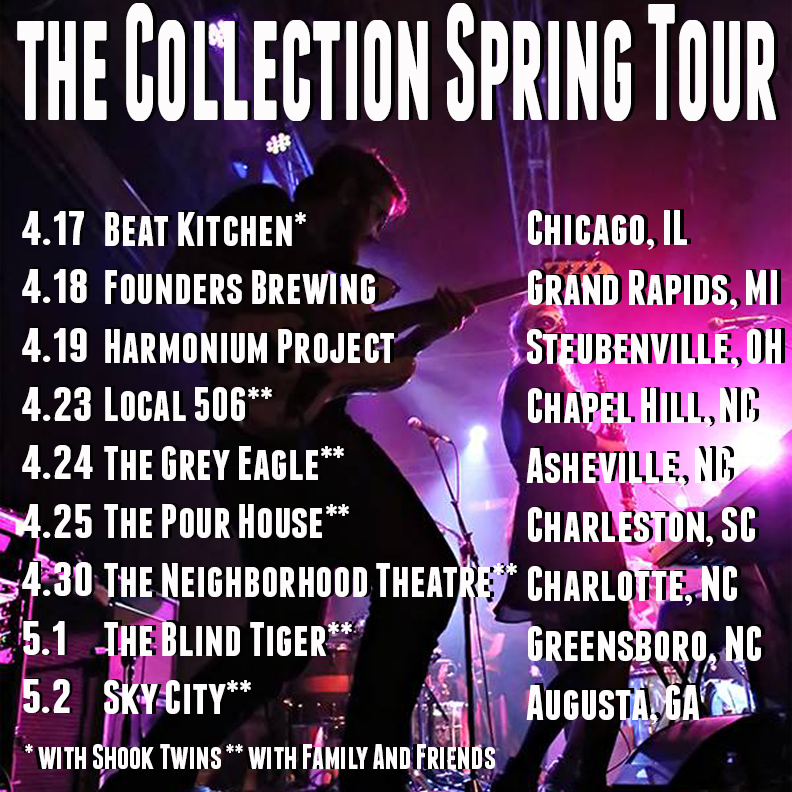 Pillowhead blows the EP format out of the water

Pillowhead’s Convictions EP does just about everything right that you can do in an EP. They establish their sound, display variations on that theme, drop in a cover, and then bring it back home with a solid tune as a closer. That’s all in five songs.

Pillowhead plays a sort of rock that isn’t pop-punk but isn’t exactly rock’n’roll. It’s not as giddy as the pop/rock on the radio, but it’s not so overly serious in its music that it falls under the modern rock label. They tackle really heavy topics on the EP (another plus!) but they do it thoughtfully and without ham-fisted theatrics. Even when a choir comes in on “The Reasons,” it doesn’t feel over the top.

If it was going to get overblown, it would have long before, when the singer starts singing to his mother about his and her failures in their relationship (for those keeping track at home: the last time this was an effective tactic not mocked by the mainstream was Queen’s “Bohemian Rhapsody”). But it never does. Pillowhead manages to make the maudlin manageable.

“The Revelation” drops into a nice groove and takes the band in a much more low-key direction, eschewing the epic for the sake of a good tune (yet another check mark!). “55 Broad” has an extended instrumental section that shows the instrumental and songwriting chops of the band (can this band get any better?).

They chose to cover “The District Sleeps Alone Tonight” by the Postal Service, which is a brilliant move on several levels. First off, they hooked me with the promise of this track; I (along with the rest of the indie world) love any and all covers of the Postal Service. Secondly, they didn’t mess with the track; they played it as a rock band playing a straight cover of a indie-techno song.  Finally, they pulled it off extremely well. Yet another kudos for the cart.

“Diseased, Misused and Wasted Youth” wraps things up; it’s also the title track, as the line “you’ve got convictions/you’ve got beliefs” shows up. It’s an emotive, powerful track, but it’s also got some solid melodies. It’s not your usual rock track, and that’s great.

This is the best possible EP Pillowhead could have released. Their songs are solid, their delivery is pitch-perfect, and their skills are undeniable. If you like rock or pop, you need this EP right now. We all know there is little justice in the music world, but if there were, you would already know about Pillowhead, ’cause everyone should know about Pillowhead. Amazing stuff.